Mountain Project is a comprehensive database of climbing areas all over the world. It was started by two rock climbers who wanted to share their climbing route information with others, online. Mountain Project is mainly run by volunteers who manage the content in the forums and contribute to the database.

As the sole designer for this 3 week project, I was excited to work with an app I use frequently. While the app presents some robust information, there are pitfalls that users experience when on the go.

I started by doing some competitor analysis and market research, curious to see what other apps are available that offer similar information. Mountain Project was determined to be the leading database for climbing routes in the United States, although because it was run by a public community, some of the information could potentially be inaccurate.

Other apps that offered a database employed professional rock guides to provide information on certain areas. However, the weakness with these apps was that the user had to pay for the digital guidebook in order to access that information.

The rest of the apps only concentrated on certain aspects, like just the weather, or just training and so become indirect competitors. None of the weather apps showed previous days, although arguably this is important information in determining how long it has been since it last rained or snowed. 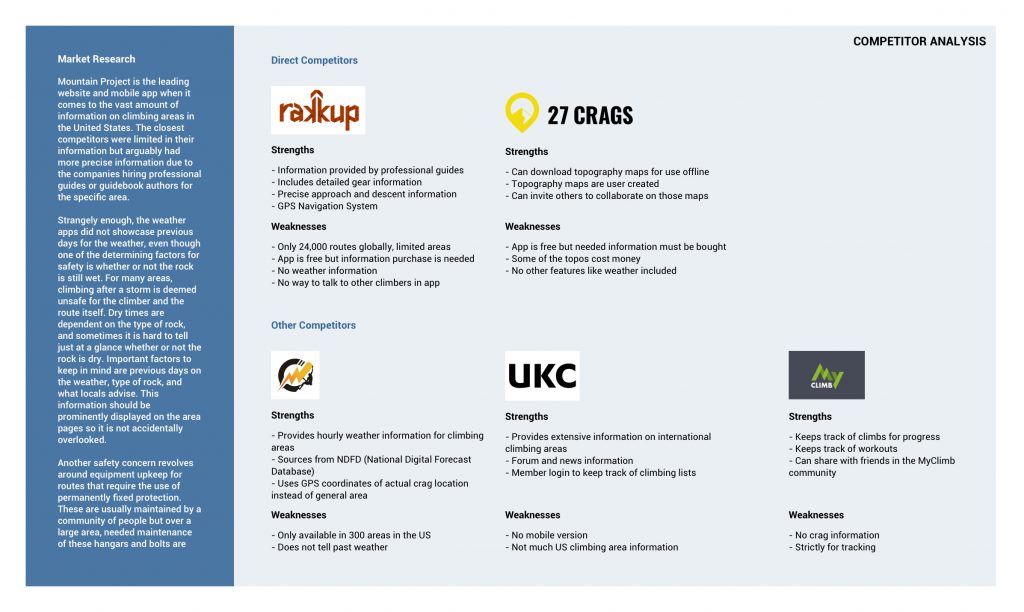 I interviewed 6 participants both male and female from 25-34 years old. All participants have experience using the Mountain Project app and actively use it before, during and sometimes after climbing trips. Some of the common points I heard were:

Since Mountain Project is a community run database, it was well understood by all of the participants that this was most likely the reason why the information was sometimes inaccurate. All of the participants researched comments for different reasons but mainly to see if there was anything that was overlooked in the description by the original author.

Putting everything together, I formed a user persona, June Gray. June is 30 years old and is always planning climbing trips around her full time job. She uses a variety of different apps to get all of her information together and then messages her friends, sometimes individually or sometimes in a group chat. She is busy and wants to get the most climbing done during her weekends, but finds it frustrating when she relies on seemingly good information only to find out that it's convoluted or too vague. June needs a more efficient way to get to the climbing area and plan trips with her friends. 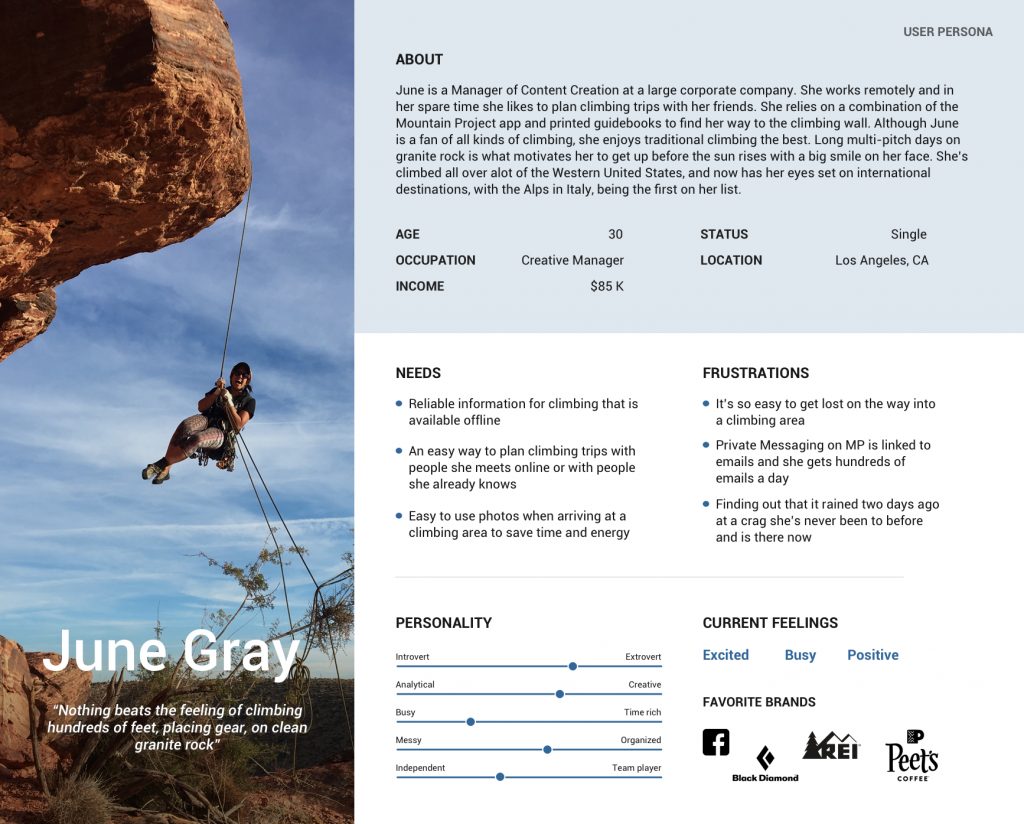 Majority of my participants didn't expressly say that they wished there was a trip planning app, however all of them plan climbing trips and use multiple applications to achieve this purpose. Usually area information for trips were first compiled into a spreadsheet, then this spreadsheet was shared to those who were invited.

From there, friends would collaborate on the sheet to add desired routes and if there were any questions or comments, they would have to jump into a group text or chat (like Facebook Messenger) to talk to each other.

Hearing this commonality, I realized that there was actually not an easy way to plan a trip within the app itself. All of my participants were active account holders and it would be beneficial and more efficient if a user could plan a trip and organize it around the climbing areas and routes that were accessible from the database.

With this in mind, I decided to include that into my goals for the project. Designing this feature would bring about bit more robustness to the project than I had originally planned, but I was inspired to make it happen.

Since the Plan a Trip feature would be a little bit more than 2 or 3 screens, I sketched out a task flow to get a better visual of how I wanted the user to create a trip and then invite their friends.

The task flow helped with the order of the screens, and as I built out the wireframes I started to flush out smaller details like how the user could delete items accidentally added. 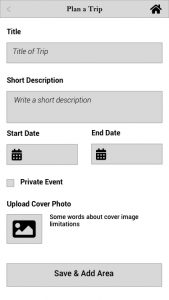 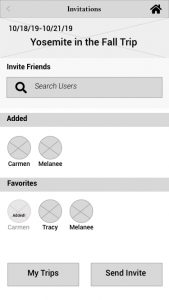 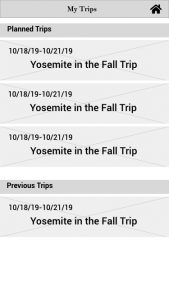 In order for climbers to figure out whether or not an area was dry, they have to know if it rained. Many weather apps don't show past recorded data since it usually is not needed, but for this niche, part of climbing safety is to know if the rock could potentially still be wet. 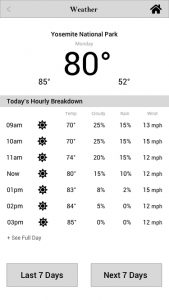 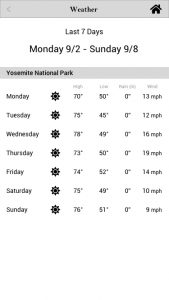 For climbing routes with fixed gear that is permanently placed in the rock. These pieces of protection are usually maintained by a small community of climbers in that local area. Most climbing areas however, are fairly large and number of routes usually are in the hundreds, so knowing which routes have to be upgraded is largely reliant on climbers to report it.

Currently one would have to sift through comments on each route to find reports. This feature would isolate those reports to one log and a user would be able to submit a report offline and the app will sync the report when the phone is within cell service. 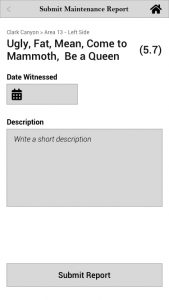 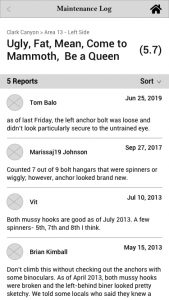 The private messaging in Mountain Project currently has users switching to conversing via email. From my interviews, many users have missed emails since upon creation of an account, sometimes they use emails that they rarely check.

An in-app messaging integration will ensure that those messages are not missed. 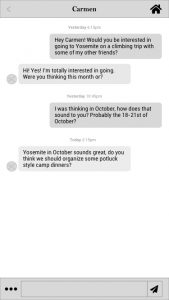 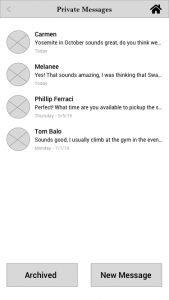 Applying the existing UI to the wireframes, I brought the frames to realization. I've probably said this multiple times now, but I find creating and applying UI to be one of my favorite parts of the UX/UI process. 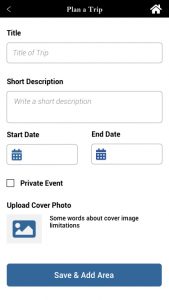 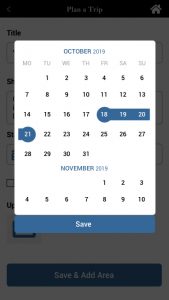 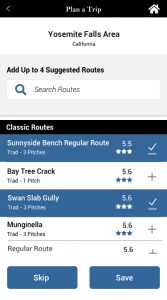 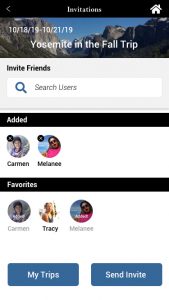 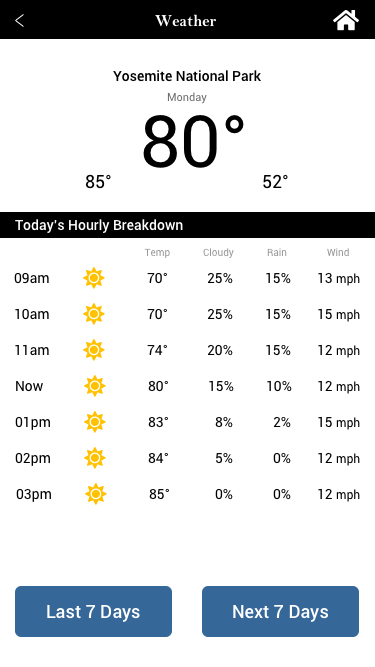 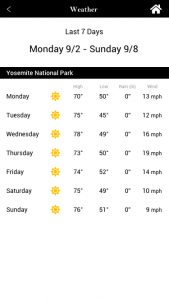 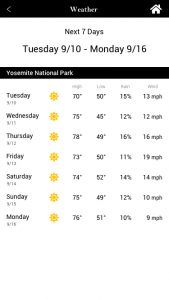 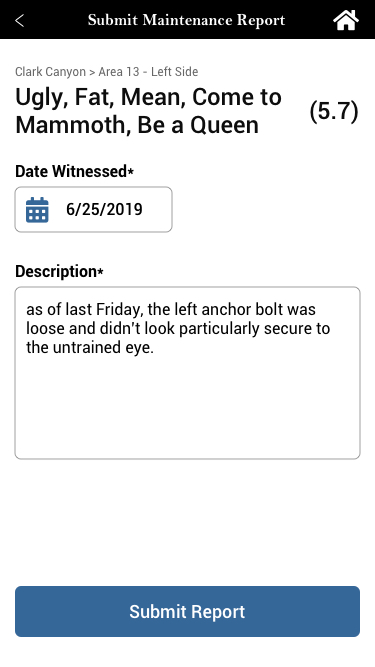 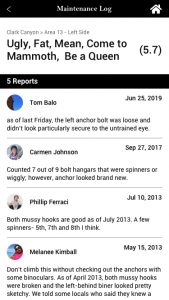 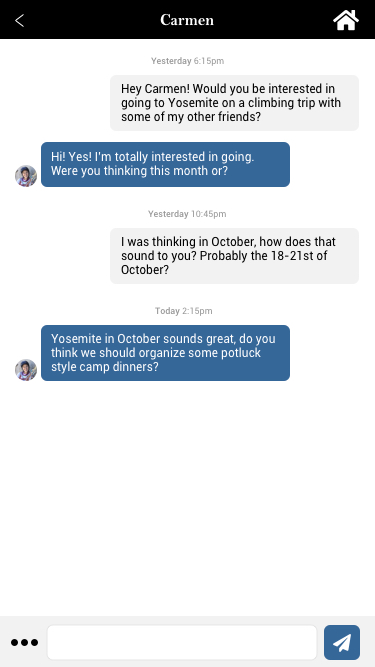 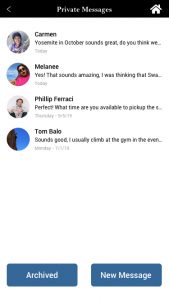 I created my prototype with Invision and started testing with the following questions:

In order to answers these questions, I tasked my participants with two tasks:

To check out my prototype:

Overall the testing went well! 80% of users rated the flow and navigation with a 8 or higher out of 10. All users also stated that they would use these features frequently.

Task One - Plan a Trip and Invite friends.

Taking all of this information, I put together an affinity map to better understand where the design was successful and where it could use improvements. 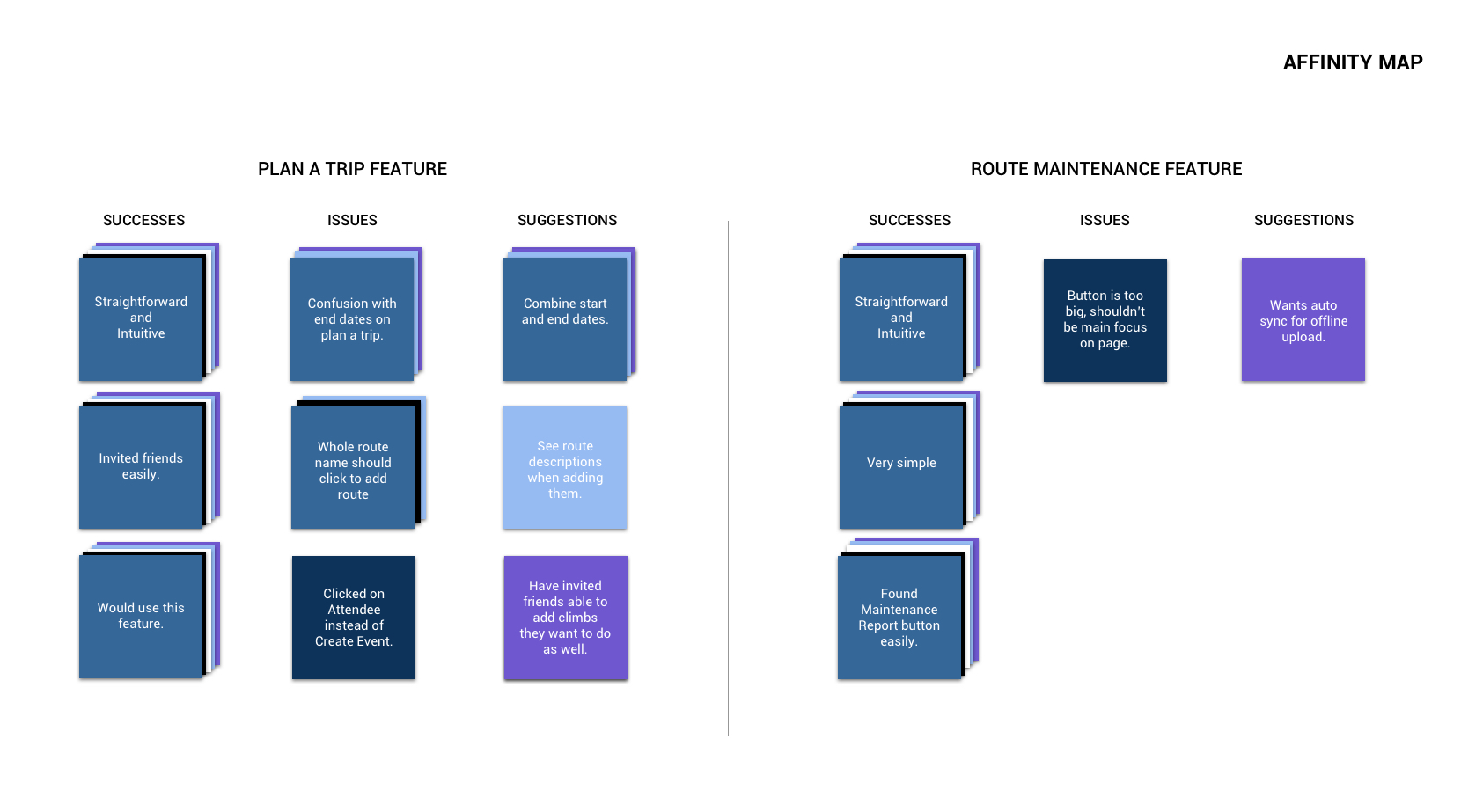 For this test I received alot of great suggestions for improvements and added features, it was great to see how involved my participants were.

There were two revisions for the Plan a Trip feature that I made based on the testing results. The first was to combine the date fields since the calendar pop up let the user select both start and end date at the same time. 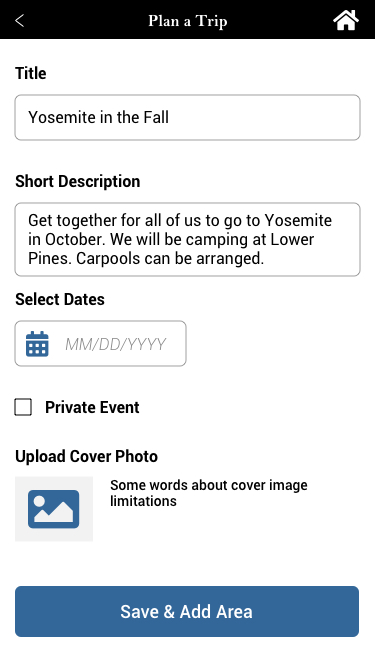 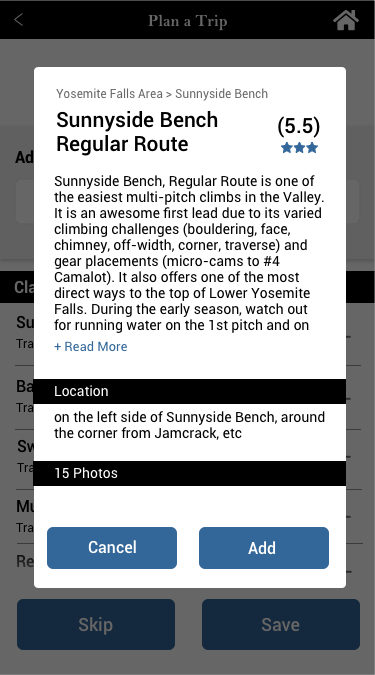 Bringing the project to a close at the end of 3 weeks, I wish I had a little bit more time to iterate on the design to implement some of the suggestions that were made by my participants.

I would expand the design of the Plan a Trip feature to show that those who are invited can also add routes.

I also would like to integrate the chat feature with the Plan a Trip feature by allowing the user to click a button to create a chat group with all of the attendees. If there are too many attendees for a chat group, then design a comments section where attendees can leave questions and comments right on the event page for everyone to see.

Something I'm not quite sure how to solve yet is being able to look at route descriptions when the user is adding them. I would have to research further to see if the description would be user friendly as a pop-up module, or something along those lines.

I was surprised at how much I learned during this project. Although short, it turned out to be very robust, and something I would definitely like to revisit in the future.